Hurtling ever further away from Earth from whence it was launched 36 years ago, is a vessel containing offerings of human intelligence and ingenuity.  It is hoped that when it is eventually ‘uploaded’ by another set of beings/creatures with intelligence, they will understand that they are not alone.  And somewhere, amidst the space and dust and screeching noise of the Universe, live (or once lived) others.

When the files are decompressed by the ‘other creatures’ they will encounter glimpses of human music.  And among the less than 100 specimens will be a piece called Jaat Kahan Ho, sung by Kesarbai Kerkar. Perhaps the creatures will not know that the singer was a woman or that she lived her life in a part of the planet Earth known as India. Perhaps they will recoil at the sounds they hear in this song based on Raga Bhairavi. But they will understand, without a doubt, that whoever sent this specimen into outer space believed it to be among the most worthy and exemplary accomplishments of the human race.

Jaat Kahan Ho indeed, is considered by some musicologists to be the finest recording of Indian vocal classical music (Hindustani gayaki) ever made. Hence, its selection in the very elite of human artefacts, even now moving rapidly toward an uncertain destination.

What a long way that record has travelled!

Kesarbai Kerkar was an Indian traditional singer trained to entertain and titillate clients as a bai or tawaaif (courtesan).  Born in the Portuguese colony of Goa, she moved to the princely city of Kohlapur in neighboring India. Always ambitious and determined to rise above her inherited role as devadasi (slave of god), which relegated her to exploitation and discrimination as a sanctified whore, Kesarbai sought training with some of the accomplished artists of her day, including the genius Khansahib Ustad Abdul Karim Khan.  But the gurus were less then enthusiastic to have her as a shahgird (disciple). She left them in frustration and resentment.

Her husband, dedicated and loving, was able to convince another mighty doyen of gayaki to accept Kesarbai as a student.  It’s a tale akin to that of a fairy tale, in which a king sets an impossible task for a commoner with no expectation that it will be fulfilled.  Ustad Allahdiya Khan was a master singer and founder of the Jaipur Atrauli gharana of classical music.  A singer of such fierce commitment he destroyed/created his voice with  his unrelenting regime of riyaaz (practice). Ustadji was also famous for picking the most challenging and rarely sung ragas to perform, earning for himself the label ‘difficult’ by his daunted peers.

So uninterested in tutoring this lowly courtesan was Allahdiya sahib that he set the following conditions:

The courtesan’s devoted husband, Gopaldas, agreed and made sure all the conditions, especially the financial ones, were met.  A bit taken aback, Ustadji, nevertheless, kept to his word and began transferring his experience and knowledge into the receptive vessel of Kesarbai Kerkar.

The relationship lasted for many years.  Kesarbai was not one to give up and in addition to adopting her guru’s long hours, absorbed the nuances of each of the obscure ragas he chose for her to sing. In between she served as cook and housekeeper for Allahdiya and in a final testament to her commitment, refrained from all sexual activity with Gopaldas until her tutelage was complete.

Kesarbai began to concertize publically around 1931. At one of these performances, the wealthy owner of a jewelry firm offered to record her for his nascent independent record label, Broadcast Records. In 1935, she cut eight double-sided performances, some lasting nearly twice the normal duration for 78rpm discs at the time. These scarce discs, some lasting 8 minutes per side, have been reissued on CD in India by Underscore Records and show Kesarbai, then in her 40s, in brilliant form and, unsurprisingly, deeply under the influence of her guru. When Broadcast went out of business, however, she heard that the remaining stock was being sold off for pittance, and these mechanical reproductions of her voice could be found in cardboard boxes at foot-level on the city streets. Insulted that years of hard work were available for pennies and treated like bric-a-brac, she foreswore recording – for the first time.

By the time of Alladiya Khan’s death in 1946, Kesarbai’s reputation and status had grown to the point that it was fashionable simply to be seen at one of her concerts. Inevitably, she was drawn back to recording, this time for the largest record company in India, the British-owned HMV whose primary studios were in her adopted home of Bombay. Between 1944 and 1949, she cut twelve performances issued on six 12” discs (seven of which are presented on this LP.)

She recorded another series of fourteen performances for HMV between 1953 and 1955. After the last of those sessions, she was given a set of test pressings for approval before they were issued, as was the custom with serious classical musicians. Of the ten sides she was given, she responded that four were not up to standard and said that she would rerecord them. G.N. Joshi, a former employee of HMV recalled in 1984 that “when, for over eight months, she did not do so on grounds of ill health [Kesarbai suffered periodically from gout], my boss became very restive and wondered that Kesarbai, a mere artist, should have the audacity to disregard the wishes of the world-famous gramophone company.” The company gave her an ultimatum: make the rerecordings in the next ten days or they would issue the rejected performances against her wishes. Incensed, she replied that not only would she never set foot in HMV’s recording studios ever again but also that she demanded that the records she made for them never be played again on the national station (and single largest venue for music in the country) All India Radio. Nothing but an absolute, cataclysmic separation from the bastards would suffice. (Her voice was still broadcast in her native Goa until 1961 when it was annexed by India from Portugal, at which point her voice when silent from the airwaves there, too.) [From the Liner Notes].

We are very excited to present some of Kesarbai’s wonderful 78 recordings made in the 40s and 50s. These have been recently released by the folks at Mississippi Records who also compiled the groundbreaking collection of Khansaheb Ustad Abdul Karim Khan several years ago.

More information on Ms. Kerkar and her amazing voice and fiery temper is available in the booklet included in the folder. 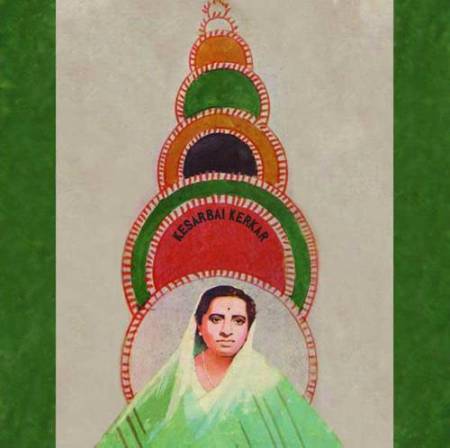 17 thoughts on “Out of this world: Kesarbai Kerkar”